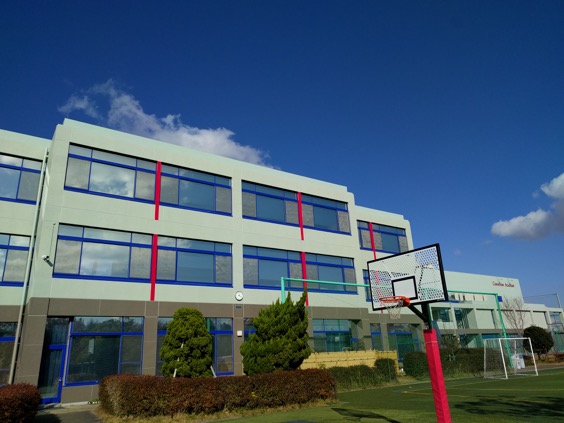 After 25 years of Kobe climate which ranges from zero to 40 degrees centigrade during the four seasons and includes typhoons and earthquakes, the main building was in need of some TLC.  Through an exhaustive RFP process on contractor and final solution was chosen.  In Japan, it is expensive to dispose of anything as items must be carefully recycled or disposed of.  The main building was covered in millions of 3cm x 3cm tiles.  Due to the cost of disposal, a pin and net solution was chosen which meant the existing tiles were pinned in place, an acrylic net placed over them and then a top coat sprayed on top.   As well as the tiles, all window frames were painted, the caulking replaced and the expansion joints between the structured replaced.  An added measure was to add a reflective film to the south and west facing windows.  Primarily this film was to cut down heat and light as summers get hot!  An added advantage of the film is that it ‘plays’ with the light and reflections around and gives the building a more interesting facade.

Choosing the solution and choosing the contractor seemed hard until… Now everything was set for the final stage… exterior design!  Here the process met Kobe City and their urban planning rules.  I submitted numerous plans that were knocked back for various reasons.  Eventually I submitted a very similar colour scheme to our newer Early Learning Activities Centre (ELAC) building.  The ELAC building is a playful, somewhat colourful building and is 10 years old.  By keeping with the colour scheme of the ELAC building and introducing our CA red to the windows I was able to get the urban planners on my side.  The final result is water tight, keeps out the elements and I believe, a huge improvement on the previous design.

Here are some before and after pictures.